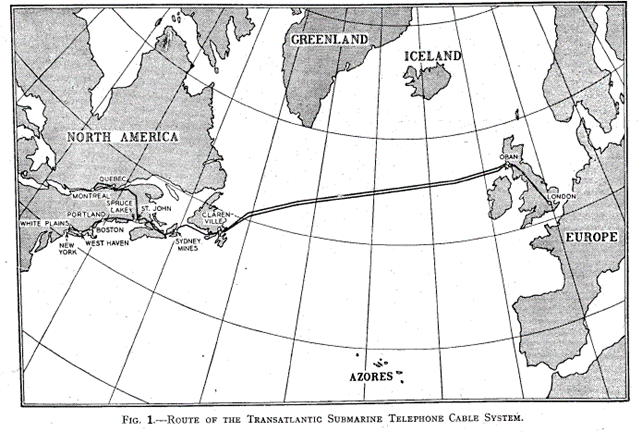 The following text was written by Jacob Ward, Assistant Professor in the History of Information, Computing, and Digitality (Maastricht University) and reflects his presentation at our Closing Conference, “Repairing Technology – Fixing Society?” from 13-14 October 2022 in Luxemburg.

This paper explores the relationship between submarine cable repair practices in the North Atlantic and the shifting political economy of international communications after World War II. In doing so, it treats the North Atlantic as a “technological zone” (Barry, 2001), forged through the practices of the telecommunications companies, particularly AT&T and the British Post Office, that developed communications links across the Atlantic. A technological zone is a space made by the ways in which technologies connect and encircle firms and nation states. For example, Windows compatibility creates a technological zone for software that spans nations yet remains bounded by one business, Microsoft. Because they involve malleable technologies, these zones require “frequent maintenance work” (Barry, 2001, p. 40). Part of this work is technical, involving practices and tools of repair and maintenance, but, as this paper will show, part of the work is also institutional, undertaken by international organisations and transnational business partnerships. This paper argues that, in order to fully understand how the political economy of transatlantic capitalism changed in the 1970s and 1980s, we must pay closer attention to the technologies and institutions that maintained this transatlantic zone and, in doing so, opened up new possibilities for international flows of capital.

In 1956, TAT-1, the first transatlantic telephone cable, was laid by AT&T and the British Post Office. In the Cold War era, submarine cables led hazardous lives, vulnerable not just to damage from the environment but also to “accidents” involving Soviet fishing trawlers. At this point in time, submarine cables were very hard to repair, so telecom companies instead focused on strategies to prevent damage. In 1958, telecom companies around the world founded the International Cable Protection Committee (ICPC) to highlight the need to protect submarine cables. For example, TAT-1’s development involved various new and old techniques to prevent damage from occurring. Crossing the far north of the Atlantic from Oban in Scotland to Clarenville in Newfoundland, TAT-1’s cable route was chosen for infrastructural and environmental purposes. Further south were telegraph cables, which might disrupt the new cable, and dangerous areas of the seabed, susceptible to turbidity currents, sediment-laden flows of water that could snap cables, as had happened following the earthquakes in 1929 in Grand Banks and in 1954 in Orléansville, Algeria. On a technical level, new undersea repeaters, developed at Bell Labs, had made TAT-1 possible. These repeaters, which amplified and extended telephone signals, had to work reliably under the immense pressure at the bottom of the Atlantic. The repeaters used this high-pressure environment to their advantage. Their metal casings, unavoidably deformed during the cable-laying process, relied on the immense pressure on the ocean floor to push them back into their correct shape. TAT-1’s final novelty was its innovative polyethene cladding, used to resist biological attack from marine bacteria, in contrast to previous cables’ weaker polyvinyl chloride coatings. 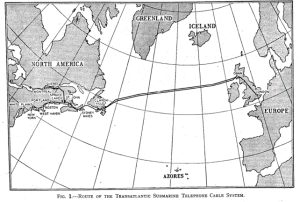 Through the 1960s and 1970s, however, new advances were made in the field of submarine cable repair. By 1976, eight new telephone cables crossed the Atlantic, and various techniques were developed to repair these cables. In 1970, the Post Office used a “sea plough” developed by AT&T to bury 80 miles of TAT-3 off the Cornish coast to protect the cable from fishing trawler damage. In 1970, the Post Office commissioned a report on the viability of using diving units to repair submarine cables. The Post Office also collaborated with the Marine Technology Support Unit at Wantage Research Laboratory, part of the United Kingdom Atomic Energy Authority, on developing underwater habitats in which engineers could repair submarine cables. The Post Office never established a diving unit and apparently never deployed submersible habitats, but its interest in these strategies highlights the pressure to devise new ways of quickly repairing damaged cables.

One successful strategy was the use of submersibles. In the early 1970s, the Post Office used mini-submarines called “Pisces” to bury and repair cable, and later in the 1970s, a consortium of North Atlantic telecommunications companies, the North Atlantic Cable Maintenance Agreement, which included the Post Office and AT&T, pooled funds to purchase two remotely-controlled submersibles, known as SCARABs, for submarine maintenance work. Another Post Office project developed a new grapnel for cutting deep-sea cables and bringing them to the surface for repairs. By 1979, the Post Office had developed the “cut-and-hold grapnel”, which could simultaneously cut a cable and lift it for repairs. The grapnel could work at depths of 5,000 fathoms, had a sonar surveillance system, and used a built-in power source to provide hydraulic operation. This new grapnel reduced grappling time by a third and total repair time by just over a fifth and was heralded as a leap forward in cable repair, quickly finding customers abroad. 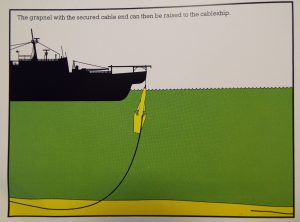 This changed from the late 1970s as the US and the UK prioritised opening international communications markets for their domestic telecom operators, AT&T and British Telecom (BT). In this new political economy of transatlantic capitalism, international cable maintenance agreements offered an opportunity to show the FCC that submarine cables had a resilient long-term apparatus for guaranteeing stable and secure international communications. The North Atlantic Cable Maintenance Agreement demonstrated the benefits of pooling resources and engaging in closer transnational collaboration on cable planning, and so, in 1977, the Post Office hosted the first North Atlantic Systems Conference. The conference, attended by telecom administrations from Western Europe and North America, was held in Eastbourne, Sussex, and was ostensibly system neutral, claiming to discuss all communication technologies, both satellites and cables, that crossed the North Atlantic. As such, the conference also invited representatives from COMSAT and INTELSAT.

The telecom administrations, however, had an ulterior motive to re-establish the place of cables in transatlantic communications. In 1976, AT&T and the Post Office, along with CTNE, the Spanish telephone administration, discussed developing the next round of transatlantic cables, TAT-7 and TAT-8. AT&T had found it challenging to secure FCC approval for transatlantic telephone cables, given the United States’ commitment to communication satellites and the security of the COMSAT-INTELSAT diplomatic and legal instrument. The telecom companies thus wanted to give transatlantic telephone cable planning greater weight in the FCC’s eyes. The result was the North Atlantic Systems Conference, which earned legitimacy by claiming system neutrality and having COMSAT and INTELSAT as participants. Somewhat too late, COMSAT’s representative realised that the conference was, in his words, an attempt to “INTELSATIZE the cable planning process to achieve a comparability with the satellite process in the eyes of the US government”. By this point, however, plans for TAT-7 had been approved, the groundwork for TAT-8 laid, and agreements made by North American and European telecom companies for further conferences in the series.

This reasserted the dominance of the submarine cable regime and paved the way for the liberalisation of international communications markets, achieving a key goal for the US and the UK in breaking INTELSAT’s pseudo-monopoly over international communications. AT&T expanded its international communication services and BT began to provide new services connecting Western European multinationals, especially financial institutions, to North America. This paper thus concludes that institutionalised, collaborative practices of repair and maintenance for Atlantic telecom providers were significant for the shift to a neoliberal political economy that focused on transatlantic flows of information and capital.